“BAME stands for Black, Asian and Minority Ethnic. It’s a term the media, governments and politicians have used for years in the UK to describe anyone who isn’t white British”.

8.1 million people in the UK, or 13% of the population, are currently defined by this term.

At Spark and Co., we don’t use the word BAME. We don’t believe it is possible to recognise the humanity, the complexity, the experiences and identities of 8.1 million lives with a four letter acronym.

Whilst its been a controversial term since it’s origin, in the past year the debate around whether we should or shouldn’t use this term has gained momentum. In the post, we explore our decision to drop the acronym and the language we use instead.

Let’s start at the beginning

The disparities in risks and outcomes for different ethnic groups when it comes to Covid-19 have been widely reported.

Our mission is to be the trusted source of information, connection and support for people disproportionately affected by the crisis. In order to do this successfully, it has been incredibly important to build a brand and use language that people identify with. 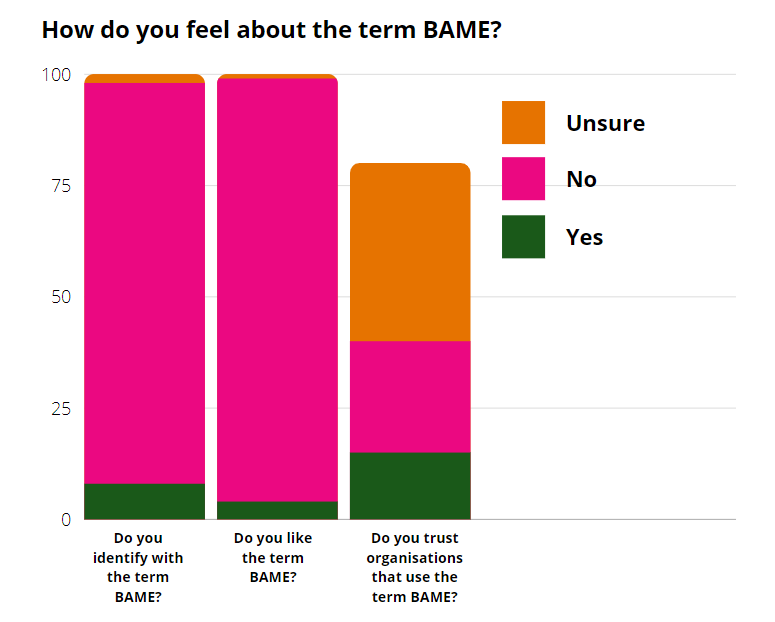 Back in August 2020, we asked our users how they felt about the term BAME.

232 users responded, 100% of whom identified as an ethnic minority.

It was clear from these responses (see left) that the vast majority of our users didn’t identify with the term, didn’t like it, and were unsure about trusting organisations and institutions that used it.

The term BAME is is problematic for many reasons.

The acronym ignores our wide spectrum of ethnicities and cultural identities. It implies that we are all the same and that our issues are all the same. This can have damaging real life consequences.

In order to support racialised communities, we must recognise that people have individual needs that require resources, support and advice that are specific and tailored.

More often than not, the reason we identify people as "BAME" is because the status quo is white-led power, and that leads to the pigeon-holing of "other groups". Qualifying anyone who is non-white as “BAME” is at best lazy and ineffective, and at worst reductive and damaging.

What about POC or WOC?

The terms "person of colour" or “woman of colour” are today primarily used to describe any person or woman who is non-white, or is considered “of colour”.

If we look at global populations and demographics - most of the world would be classed “POC”. However, despite being the global majority, the term POC still lumps everyone who is non-white under one acronym.

It doesn't, for example, recognise the tensions and challenges that exist amongst non-white groups, it doesnt recognise the intersection of faith, gender or sexual identity with race and it doesn’t recognise historical and social contexts.

The terms POC and WOC are relevant and applicable when we refer to challenges, issues, contexts that all people or women of colour have in common in comparison to white counterparts.

What words do we use?

After a lot of thought and conversation with the people and communities we work with, we recognise that it is important to be clear in our language and its impact.

We now use the word "racialised". This word acknowledges that ethnic minorities are often categorised first and foremost by race because of the white-led systems that we exist in.

"Racialised" doesn't define the community or the identity, but rather the phenomenon that has happened to them

To see how we use this word in context, explore our content and or social media.

By recognising the inherent complexities that exist within different racialised people and communities, we aim to tailor our approach accordingly. Our mission is to tackle racial inequality by equipping with support that is relevant to them - we can’t do this if we lump 8.1 millions lives under one umbrella.

Language is a really important place to start because it informs so much more - attitude, mindset, approach, delivery. As individuals, organisations and institution, a starting point is to drop a simplistic and limiting terms like BAME.

We are always learning, growing and adapting - as are the people and communities we work with. We are open to your feedback and thoughts.

In the coming months, we’ll be sharing more of our research and insights. Sign up here to stay posted.

This piece was written by our Founder and Director, Ishita Ranjan.