National statistics suggest that 1 in 4 women and 1 in 7 men in the U.K. experience domestic abuse. It is shockingly common but still seen as too ‘taboo’ of a topic to talk about openly.  As a result, many people do not know how to spot the signs of domestic abuse and how to best support loved ones experiencing it.

Domestic abuse is officially defined as an incident or pattern of incidents of controlling, coercive, threatening, degrading or violent behaviour. It is most often carried out by a partner or ex-partner, but family members are carers and can also be perpetrators. It occurs between adults - so people over the age of 16. Abuse involving people under the age of 16 is legally recognised as child abuse.

There is a common misconception that domestic abuse just involves physical violence, but this is not true. There are several types of domestic abuse which are listed below and in this infographic which will hopefully help explain the types in more depth:

Physical Abuse
Is the intentional act of causing injury to another person. It is the most visible type of domestic abuse. It includes things like hitting, punching, kicking, strangling, and hurting someone with physical objects, as well as threats of violence and death.

Emotional/Psychological/ Verbal Abuse
Psychological abuse is the repetitive and intentional use of non-physical actions that manipulate, hurt, frighten or intimidate another person. Emotional abuse is one of the hardest forms of abuse to spot because it leaves no visible scars. Common examples include: continuously shouting and swearing, bullying, repeatedly putting someone down repeatedly and making unwanted comments. It also includes gaslighting, which is when a perpetrator manipulates the truth and makes a victim second-guess their feelings.

Economic Abuse
Economic abuse focuses on using money to control and manipulate someone. Common forms of economic abuse include controlling someone’s bank account, not giving them access to their money, controlling someone’s spending, depriving someone of food and necessities and fraudulently claiming benefits. It also includes getting someone into debt intentionally and threatening them with homeless or destitution if they do not do what you say.

Sexual Abuse
Is any action that forces or coerces someone into sexual activity. It is never consensual. The most commonly discussed forms of sexual violence are rape and sexual coercion, but sexual abuse also includes: restricting someone’s access to birth control, refusing to use condoms or taking a condom off without consent, rough/violent sex that has not been mutually consented to and revenge pornography 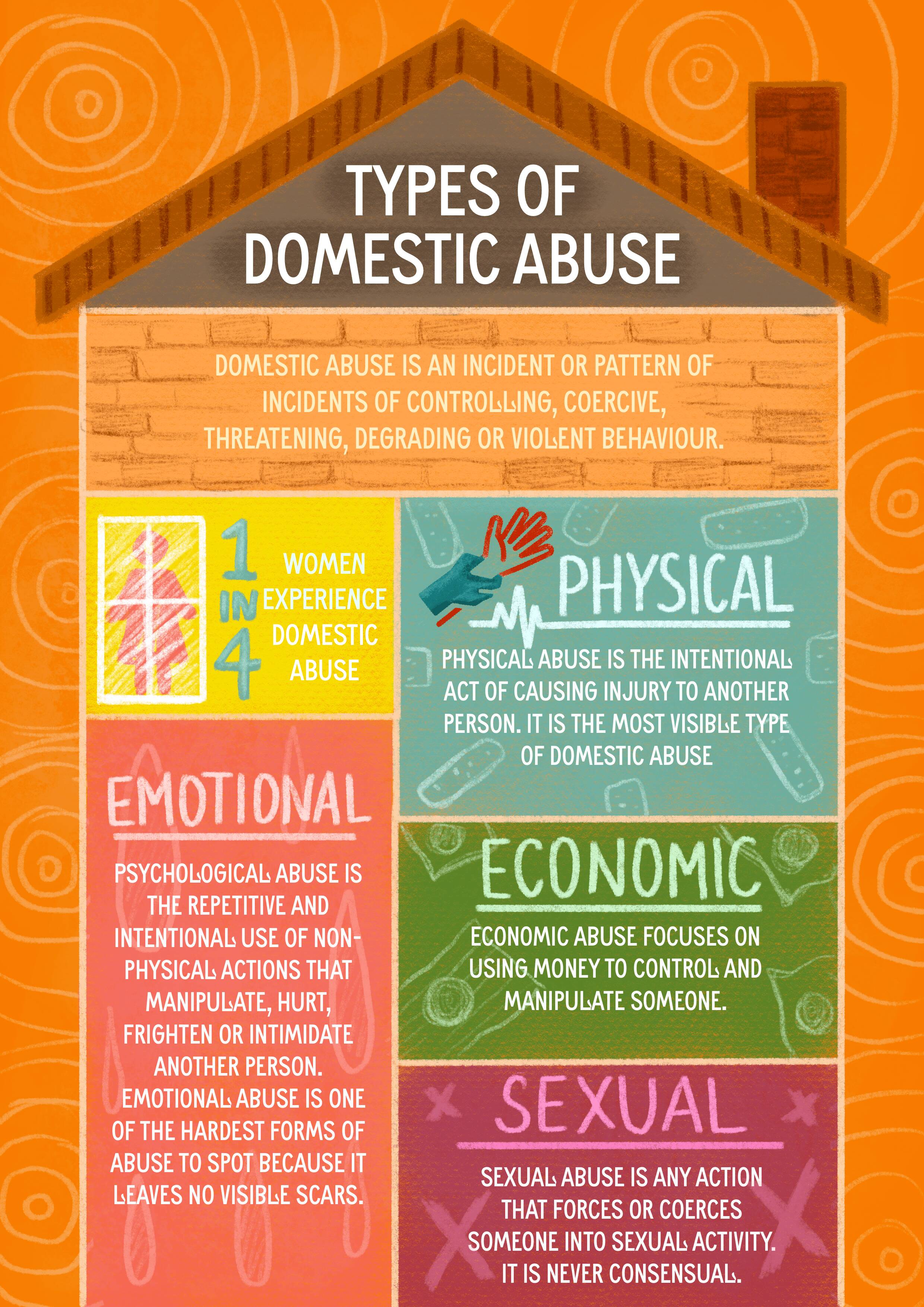 If you are or know someone experiencing any of the above you can access a range of support services on Spark and Co here.

This post was written by one of our Community Ambassadors, Violence Against Women and Girls Educator Ammaarah Zayna. Artwork provided by Khadija Said.

Find out more about Ammaarah and Khadija here.